And I still have a clean sheet – zero breakdowns.

A couple of gratuitous photos and then a summary of what I’ve learnt in 4 years, plus how it’s measured up against the myriad of myths about TVR ownership. 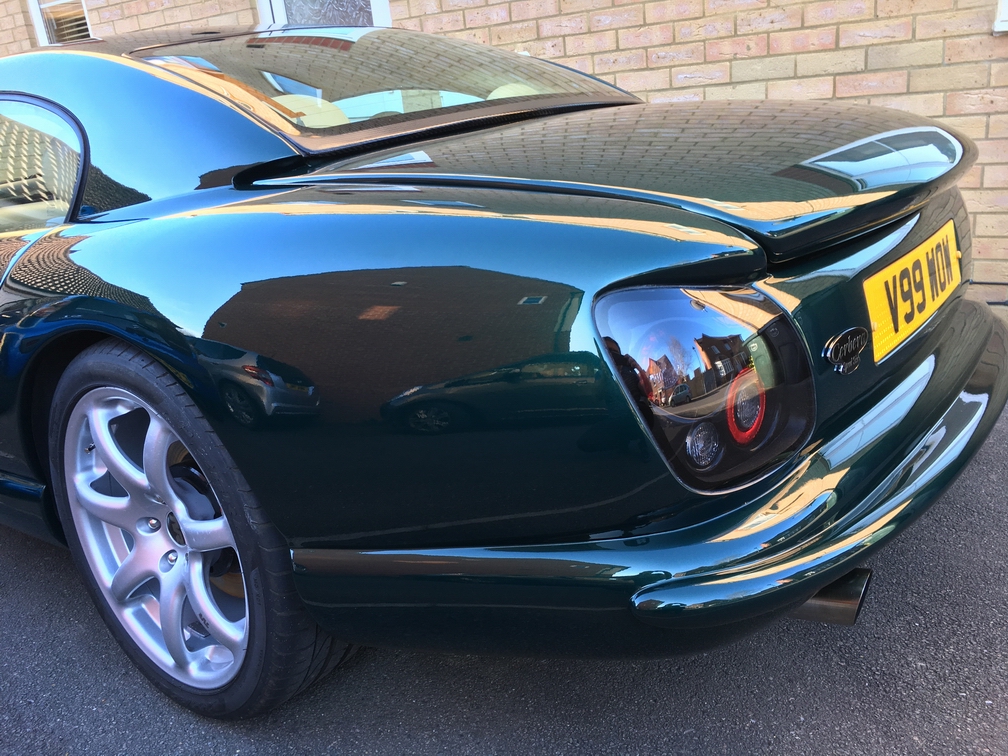 You’ll be best friends with your local RAC guy.
As well as owning a Cerbera now for 4 years, I do a lot of reading (pistonheads/facebook etc), met a lot of fellow TVR people, and read & heard about all sorts of problem topics from various TVR models. The conclusion I have formed is this: I see a lot of topics about Wedges and Chimaeras. These fall in to 2 categories, those that have been heavily modified (turbo etc) and run in to all kinds of related problems, and those that DIY maintain their own cars.
Running a TVR is not something I would advocate trying to do on a shoe-string budget. There are a couple of people I know that do DIY maintain their own cars, and these guys are more than armchair mechanics – so there is a place for self servicing, if and only if you are up to it.
The later cars (T cars, Cerbera, Sagaris..) you hardly see any problem topics written about, other than the consumable stuff like clutches and exhausts.
And the other topics you do see written about are predictable each year. 1) owner mothballs it for the winter 2) comes back to it in April and has problems.
I’ve never had this problem. But then I give mine a run around the block at least every 2 weeks over the winter, just picking a day when it’s dry. They like to be used – so use it!

TVR electrics are a joke ..fireball..
This is kind of related to the above. TVR electrics were a joke, but any car still on the road after 20 years, will have had these niggles figured out by now. Electrics wise, I think I’ve had a failed door solenoid and a Lambda sensor.

The engine will go bang
When I first got my car, I took it to TVR Central for a thorough look over. I was petrified what they would find, especially when I gingerly asked “how’s the engine?”. My question was answered with 2 more questions, “has it had a rebuild?” and “who did it?”. When I replied “yes” and “Str8Six”, the reply was – don’t worry about it, it will run fine for years.
Engines can go bang, they are race engines afterall, but this myth largely is harping back to how things were when they were new. Pretty much all Cerbera engines failed from new.

There’s definitely a pattern here.. The Cerbera, and in fact TVR generally had a lot of problems 20 years ago, and the non-owner population remember this and haven’t moved on.
I suppose an analogy would be Skoda. I’ve never owned one, and if I wasn’t a car-guy, then I would probably be as ignorant as a large part of the population that still giggle at the name Skoda – and for 1 simple reason- they were quite rightly a joke 20 years ago. They’re not now though.

The chassis’s are all rotten
This is a tricky one, there is a lot of hype and scaremongering out there; and it’s the perfect formula for scaremongering because it refers to something you can’t easily see or prove.
Let’s break it down a little.. are all Cerberas today running around with decrepit chassis’s – no of course they aren’t, else they’d all be impounded.
Do some need work/replacing? – yes, and we’ve seen the photos from those that have done it.
So what’s the right thing to do here? replacing a chassis is a 7-10k job after you’ve decided to also replace other items while you’re there.
Those that had their chassis’s replaced didn’t just wake up one day and decide to do it- there were tell-tale signs that led them to that decision. Crusty outriggers, heavy corrosion on the main chassis rails – if generally the car has had a tough life it usually looks like it, and the state of the visible chassis will give some clues.
I had mine checked out when I bought it and also I asked the question (again rather gingerly) when it was with TVR Central. The response I got was akin to what I described above- “usual surface rust, it’s fine”. “Don’t believe all you read, they don’t all need doing”.

the best advice I was ever given.

They overheat
Do they? I had an aluminium radiator put in mine and had it out in 30deg+ weather queuing in traffic for hours. Mine didn’t overheat.. maybe this is another 20 year old thing that used to be.

They’re a money pit
This is subjective of course.
It’s a high performance 90s supercar – it will cost something.
Before buying, I was told from many people, budget 3-4k a year.
So what does it actually cost?
Well, in my first 2 years of ownership, I chose to replace a lot of stuff (radiator, clutch, starter, alternator, gearbox rebuild..) – I wanted to quickly get to a high level of reliability. So I spent a fair bit more than that 3-4 average.
But since then, fuel is my biggest expense. Servicing is around 1k a year (depending on what else you are having done at the time), which according to my man-maths leaves budget for the shiny aluminium upgrades 🙂 ..

[any TVR make] will try and kill you, and at best put you backwards through a hedge
The absence of electronic aids do mean you have to keep your wits about you- true.
But treat it with respect, and you can (almost) tame it.

Steer clear of an accident damaged car
I’m in two minds on this one. On the one hand, if given a choice of 2 identical cars, identically priced, but one had been backwards through a hedge at some point in it’s life.. then sure, pick the one that hasn’t.
But bear this in mind, cars like this (and it’s not just TVR’s) do tend to pick up accident damage. If I didn’t care about the stigma attached, then all that would be important to me, is the quality of repair, and who did it.

There are a number of parts to this..
Let’s deal with the £ part of it first. If I had 3x or 4x cash value of what my Cerbera is worth, I would probably be driving a different exotic car. But I don’t.
But I get it, the Cerbera is hands-down pound-for-pound the biggest bang for your buck out there today. Probably because they are undervalued (due to the myths above) – so this really comes down to how much of an experience, theatre and sense of occasion you are getting for your hard-earned £.
Any honestly, (and believe me I’ve looked, nothing beats it)

The Cerbera is an exotic. I’ve found myself parked up with a group of cars each costing 5x as much. I’ve seen people walk past the red Italian stuff and head straight for my car, because they just haven’t seen one since they last played Gran Tursimo. Did I mention the dashboard.. I’m not sure if there still is anything out there today that eclipses the Cerberas dash. I’ve found myself looking at Dodge Vipers in the classified, only to see the dashboard and feel completely underwhelmed to the point that I just couldn’t do it.

The next part is about, well parts, as in spare parts.
We already know that an old-school analogue car is more fun and more engaging, it’s why I own a TVR and why you’re reading this. On the occasions that I do find myself looking through the classified at other cars from my youth, each time I dig a bit deeper I come across the same challenge, lack of spares. For example, I found myself looking at Renault 5 GT Turbos the other day (I had one when I was I younger), so I joined a FB page and started reading, and what I found was a group of people discussing who had a stash of a super-rare part, who was 3d printing something etc. In short, there was a clear parts shortage.
So maybe not all 80s/90s marques are the same as this, but it made me feel grateful of the support TVR has, specifically the Cerbera. Since I’ve owned mine I’ve never (nor the TVR service centre that services mine) not been able to get hold of a part within a couple of days. As well as a number of OEM TVR parts suppliers, there are TVR garages up and down the country, specialist dedicated tuners and engine builders. And with only a few hundred Cerberas on the road, it reminded me how lucky we were.

The last part also, in a round about way, addresses the Speed Six vs 4.2/4.5 V8 age old topic. Although, I’m not going to again talk to this topic specifically, but instead more generally.
How fast do you want to go? There is always something quicker out there on the road. Going faster is simply a case of how much do you want to spend. I read earlier about the new McLaren, crazy crazy hypercar, sub 3 sec 0-60. But put that in to perspective, that’s ~1 sec quicker than a Cerbera. I know it’s not that simple, and of course you will feel that 1 second.. and believe me, if I could I would. But really, the Cerbera is fast enough, it’s already too quick, and that’s in any engine guise by the way. 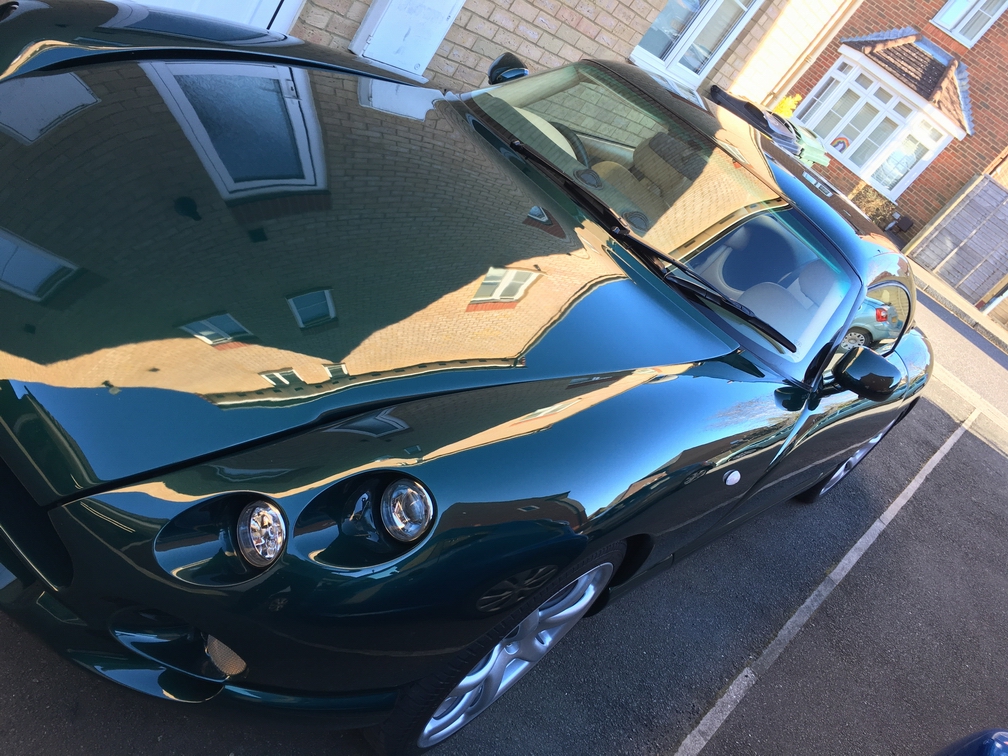